Hi! Welcome to my blog! The calendar has just rolled over into September and it’s starting to get a little chilly here in Maple Ridge, Canada. I already miss the summer weather. A couple of months ago I turned over an old leaf. I started playing live shows again. It had been a while since I had taken the stage with a band. This time, however, I was going to just get out there with a guitar and play some of my original songs at open mics around town to showcase my songwriting. 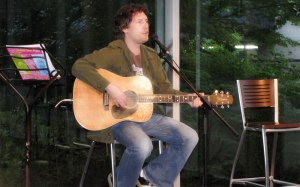 My first performance at The ACT

Having traveled to Nashville recently, my approach when I returned home was different. I’d spent a lot of time locked away, polishing my songs. I was sending them out to Nashville, trying to get them recorded by other artists. I thought I could break into Nashville from a distance. This approach wasn’t working. “You have to be in Nashville to be successful in Nashville” was a common phrase I heard repeatedly. So I decided to put that idea into effect right here in Maple Ridge!

While at a Ridley Bent concert at the ACT arts center, I had a chance meeting with Ivan Boudreau, a local songwriter, who told me about an open mic lobby series he presents at the ACT. Wow! As soon as I set the intention, that first contact came fast! I attended the open mic and played two songs. I was a little rusty, but I did pretty good for my first time back out in public. From there, I heard about an open mic at the Kanaka Creek coffee house on Wednesdays. 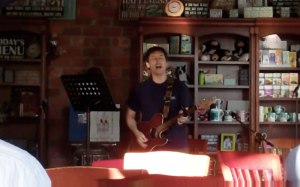 My first performance at Kanaka Creek

My first appearance at Kanaka was interesting! I walked in with my guitar and met Pam Burns, who runs the event. She’s a lovely lady with a great English accent. Just before I was going to play, the power went out! No mics and no sound system for the guitar. She asked me if I wanted to play anyway and I said, “Sure!” I played a couple of original country songs and the applause was terrific! Pam was very impressed and insisted I come back the next week. Since then, I’ve been a regular at the Kanaka open mic.

I was on my way! What happened next was really cool but I’ll save it for my next blog!