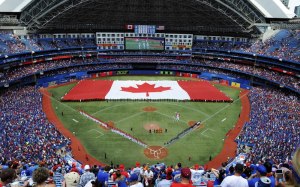 What a day!! Even though, by the time you read this, it might be yesterday, a week ago, or even a year ago that I wrote it, the cool thing about a blog post is that it’s a frozen moment in time! What happened today was something I hadn’t experienced in twenty-two years … a post-season baseball game played by the Toronto Blue Jays!

Even though I was watching the game on television, I could feel the thrill and excitement of the game blazing across Canada! It almost felt like I was right there in Toronto at Roger’s Centre. What’s different and really cool about this year’s playoff verses 1993, however, is that Canada, and the whole world really, is a virtual global village thanks to Twitter!

It was fun to see things happening on the television screen and at the same time be able to instantly communicate with all the other Blue Jays fans about it. It really did feel like a whole nation coming together to support our only baseball team. The funniest tweet I read today was very clever! Josh Donaldson (the MVP candidate for Toronto) made a great slide into second base and effectively eliminated any chance of the Texas Rangers turning a double play. However, in the process he was hit in the head by the knee of the jumping second baseman for Texas. Josh was taken out of the game and the tweet that made me laugh said, “The Blue Jays need Josh Donaldson! The Texas Rangers kneed Josh Donaldson!” I thought it was very clever and re-tweeted it, of course!

As well as discovering how much fun it is to monitor Twitter during an historic moment, I’ve also discovered something about myself as a songwriter during the last few weeks of fantastic baseball. I figured out something that makes me extremely happy as a songwriter, and that is combining my songwriting talent with my love of the Toronto Blue Jays! I wrote a couple of songs to celebrate the success the Jays have achieved this year. The difference between these songs and other songs I’ve written is that other Blue Jays fans are loving them as 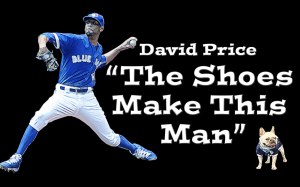 much as I loved writing and recording them! For the first time in my life, I feel like I’ve achieved the kind of success I have been looking for with music … bringing joy to others! So thankfully I have just taken a snapshot of this day and can look back on it with fondness for years to come!

If you would like to listen to the songs and watch the videos, visit my YouTube Channel.